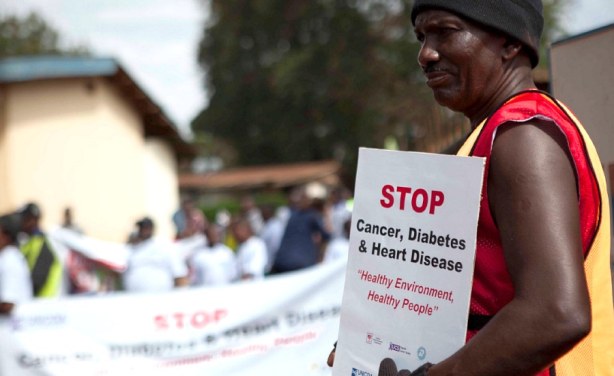 Given its fixation on research-driven, interactive and theory-based methods of communication, the social and behavior change communication framework (SBCC) appears to be one of the strongest lines of approach for advancing the effective communication of non-communicable diseases to halt the growing incidence of those diseases across Africa.

SBCC is a strategic communication framework used to inform and facilitate changes in norms and behaviors across multiple levels of society which include the individual, community, and policy levels.

Unlike regular communication campaigns like press releases or radio and television broadcasts, this peculiar framework fuses important educational information with a dose of entertainment. It thrives on infusing television drama series and other manifestations of popular culture with important social messages to spur social change. SBCC shows rather than tells; instead of just telling people what to do or what not to do through regular promotional campaigns, SBCC models to audiences the possible implications and consequences of their actions, and spurs them to self-reflect whilst also giving them practical tips on how to adapt and cultivate the desired behavior.

Since non-communicable disease risk factors are tied to unhealthy behaviors including tobacco consumption, harmful alcohol use, physical inactivity, and insalubrious diet, SBCC which does not only facilitate individual behavior change but also seeks to dissect and dismantle the "social and structural drivers of unhealthy behaviors" in a society (Perlman et al., 2013, p. 31) seems to be our best bet towards driving the massive reorientation required to get Africans to reduce tobacco consumption, embrace physical activity and adopt healthy diets.

Effecting behavior change is not a linear and straightforward process. Behaviors/habits are formed through a complicated web of interactions between several constituents of a convoluted system that consists of equally intricate sub-systems; economic, political, and social. Behavioral change, therefore, requires a multifaceted approach driven by reorientation and community participation to foster social learning and efficacy (Perlman et al., 2013).

SBCC will be effective in combating the imminent threat of non-communicable diseases in Africa for a couple of reasons. First, at the core of SBCC is storytelling, and as storytelling is deeply entrenched in the African cultural practice, SBCC, therefore, has better potential to resonate with an African audience. Moreover, SBCC can inspire para-social relationships between media audiences and fictional characters. The more audiences can relate to the life experiences of those they see on screen, the higher their self-efficacy becomes and the more likely they are to behave like those characters; “character X is male and so am I. He is in high school and so am I. If he can eat healthily, consume less alcohol, break his tobacco addiction to lead a healthier lifestyle, I should be able to do the same.”

Besides, the community participation component of SBCC aligns, to a large extent, with the age-old African cultural values of good neighborliness and extended family systems which might motivate communities, especially in suburban and rural areas, to take communal action that will break the structural and cultural barriers preventing people from making responsible health choices that keep non-communicable diseases at bay.

To effectively apply the SBCC framework to combat the affliction of non-communicable diseases in Africa, the first step will be to clearly define and understand non-communicable diseases in the African context; especially the peculiar social, political, cultural, or economic realities that inhibit people from adopting practices that keep non-communicable diseases at bay and the unique characteristics of the target population. The next step is to critically evaluate behavior change theories and adapt apposite one(s) to the SBCC framework to frame and design programs tailored to the peculiarities of non-communicable diseases in Africa. Thereafter, program managers need to consult with prospective audiences, partners, and other concerned stakeholders to design communication products (songs, docudrama series, movies, etc.) that specifically address the demotivating factors that have been identified as constraining individuals from adopting disease-preventing behaviors. Following the stakeholders’ consultation is the launching and actual implementation of communication products across multiple channels. The final step of the program process, which also is arguably the most important, is the program evaluation process where the program outcomes are measured against its objectives.

However, it is worthy to note that the menace of weak health and infrastructure systems plaguing many countries across Africa may pose serious challenges to the successful implementation of SBCC programs in Africa. Another probable challenge has to do with reaching marginalized populations, especially those in rural communities where access to electricity, telecommunication, media technology, and the internet is quite limited.

Perfect case studies of health communication projects where the SBCC framework has been successfully deployed include MTV Shuga, You Only Live Once (YOLO), and the GoodLife Project in Ghana.

Produced by the MTV Staying Alive Foundation, MTV Shuga is a television drama series focused on slowing the spread of HIV/AIDS and other sexually transmitted infections and decreasing the stigma attached to HIV by promoting responsible sexual behavior among young Africans. Since it started airing in 2009, MTV Shuga has reached an estimated 720 million viewers across the world. The popularity and success that the series continues to garner across the globe make it a subject of discussion and analysis especially among African communication scholars. One of such evaluations is the rapid polling assessment conducted in South Africa by Dr. James Lees and Mr. Joachim Jacobs. Both scholars polled 3618 high school students in eleven schools across South Africa. As results from their poll revealed, it is established that MTV Shuga is a pivotal tool for motivating young people to adopt sexually responsible behavior because after watching season 4 of the series, 84% of the poll participants “said that because of Season 4, they will definitely’ be more careful about HIV; 80% said they will be more careful in relationships; 81% more careful about sex; and, 77% more careful about getting pregnant.” In the same vein, another evaluation of the MTV Shuga series conducted across 240 communities in Southwest Nigeria showed that young women who watch the television series reported less incidence of chlamydia than those who do not.

YOLO (You Only Live Once)

YOLO is a Ghanaian teenage television series produced by Farmhouse Productions Limited in partnership with the Ghana Health Service, National Youth Authority, Ghana, and the Ghana Education Service. Like MTV Shuga, YOLO is also focused on addressing issues of youth sexuality. With regard to the effectiveness of the series as a viable tool for providing helpful insights about youth sexuality to help teenagers make sound sexual health decisions, Adabla (2019) quoted one of his research respondents as saying that:

... I have not had many sexual experiences, so I know very little about the whole STIs

and all that. But I got to know more by watching the YOLO TV series. You know, this TV series is

sponsored by the Ghana Aids Commission and Ghana Health Services. Their message is to

inform adolescents and young people like me about reproductive health issues. I’ve learned the

need to protect myself from unwanted pregnancy and STIs by using condoms. So, I would say

yes, sex education has really informed me; something that my parents or teachers don’t teach

Unlike MTV Shuga and YOLO which focused on sexual and reproductive health behavior, Ghana GoodLife, Live It Well Campaign project was broadly premised on issues of family health; nutrition, water, and sanitation, malaria prevention, family planning, maternal and pediatric health. The major objective of the program was to link personal happiness with the practice of responsible family health behavior. Strategies that the campaign adopted include musical concerts, game shows, mini docudrama, and hip-hop songs together with billboard messages and the GoodLife health guide that provide practical tips for healthy living.

Evaluations of the project’s effectiveness revealed that individuals exposed to the GoodLife campaign led to a dramatic increase in the use of zinc and ORS to stem the tide of child mortality. It is in fact stated that the sales of zinc and ORS “increased dramatically by over 280 percent (about 8.1 million tablets) during the first quarter following the launch in 2012.” Besides, the campaign also inspired communities to form community blood donation groups and mobilize more people to donate blood in a bid to reduce maternal death in Ghana.

That the SBCC framework has been well deployed to promote sexually responsible behavior and family health is a testament to the fact that it can as well be successfully deployed to promote healthy behaviors that will slow the spread of non-communicable diseases across Africa.

About the author: Driven by an avid interest in sustainable development, Elias Gbadamosi’s research and teaching interests lie at the intersection of civic engagement, policy development, and communications. He is a graduate student currently researching how governments and their agents can effectively communicate social policies to citizens in a bid to cultivate civic trust, foster inclusive governance, and accelerate sustainable development outcomes.

Adabla, S. (n.d.). Perceptions, Attitudes and Beliefs of Youth Regarding the Use of Sexual and Reproductive Health (SRH) Services in Ashaiman, Ghana. 97.